Information for Dog Breeders and Owners

What is a genetic disease?

Phenotype refers to the outward appearance of the structure. Phenotype may be the result of either genes or effects of the environment.

Progressive Retinal Atrophy (PRA) is by definition a genetic condition resulting in degeneration of the retina and blindness in affected dogs. There are many different types of PRA with different modes of inheritance and different ages of onset but the most common type is seen in middle aged dogs of affected breeds and is due to a recessive gene. Classic breeds for PRA include the Miniature and Toy Poodles, Cocker Spaniels, Labrador Retrievers, Golden Retrievers and the Australian Cattle Dog. A number of different genes have been identified to date, the most common is the prcd or progressive rod-cone dysplasia gene. The first sign observed is usually night blindness with poor visual function in low light conditions progressing variably over months to years to complete blindness. There is no treatment.

A cataract is an opacity or cloudiness of the lens. The lens is found inside the eye behind the iris and in front of the retina. It is ovoid in cross section and was developed in evolution as a means of bringing into focus on the retina, structures close to the eye. In younger animals the lens has the ability to change shape to accommodate so that the eye can focus on objects at near or far distance.

Entropion refers to a disorder where the eyelid margin rolls in and irritates the surface of the eye. Perhaps the most common type of entropion seen involves the lateral lower eyelid or lateral canthus (where the upper and lower eyelids meet at the outer edge of the eye). 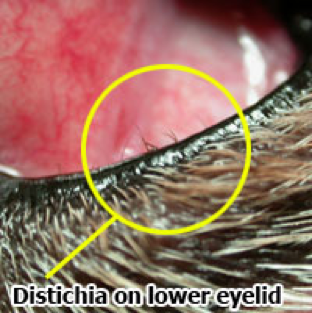 The term distichiasis refers to abnormal hairs which arise from the eyelid margin. Normally the eyelid margin is identified by small openings of ducts leading from glands deep within the eyelid. These meibomian glands are responsible for producing lipid for the surface of the tear film and are modified sweat glands. Normally they do not contain hair producing cells, but occasionally something goes wrong in embryonic development and hairs grow from these glands. The hairs are not always but usually irritating to the surface of the eye because they stimulate pain receptors in the surface of the cornea. A common sign of distichiasis is a watery discharging eye.

During the development of the eye, the front or anterior chamber of the eye is filled with a primitive embryonic tissue called the pupillary membrane. As this tissue disappears the pupil forms. Normally the pupillary membrane totally disappears but occasionally remnants of the structure remain in the eye as strands bridging the iris, or strands which travel from the iris across to the lens or cornea.

The vitreous is the clear jelly like mass in the posterior chamber of the eye which fills the space between the lens and the retina. The vitreous goes through three phases in its development with formation of the primary, secondary and tertiary vitreous respectively.